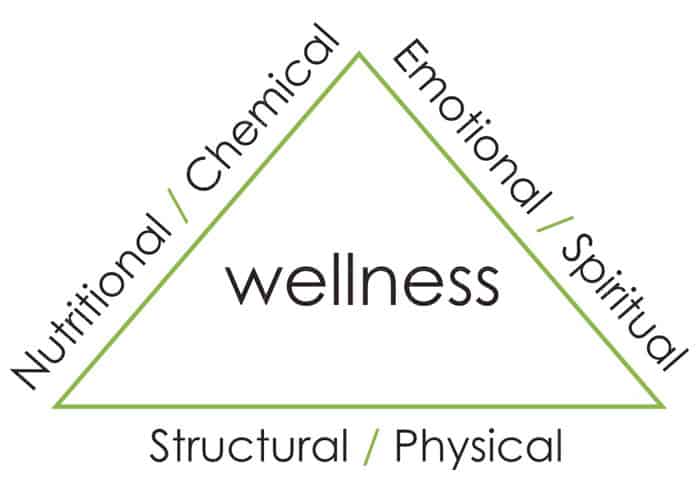 Health is composed of structural, chemical, and mental factors that should be balanced, forming an equilateral triangle. When a person experiences poor health, one of the three factors of the triad of health is always involved. With severe health problems and chronicity, two or all three of the factors of good health may be contributors. Applied Kinesiology, as well as specific nutritional evaluation systems such as Nutrition Response Testing, Morphogenic Field Technique, and Follow The Physiology Technique enables us to evaluate the triad’s balance.

Those who work with the structural side of the triad of health may include chiropractors, massage therapists, physical therapists, and other bodyworkers. This is a side with which chiropractic has always been involved and is the base of the triangle. Many chiropractors have limited their concentration to the removal of spinal subluxations to improve nerve function. This, of course, has obtained excellent results, and it always will. However, the muscle balancing techniques used by the Applied Kinesiologist can help maintain these chiropractic corrections by turning on the muscles that have been weakened via traumatic events. Many health problems with which the chiropractor and the other therapists must deal with will improve to a higher level when the other two factors of the triad are included.

Currently, the chemical factor of health is dominated by “allopaths”
such as Medical Doctors, Doctors of Osteopathy, and Psychiatrists.
Nutritionists perform an important role in health care by concentrating on the chemical side of the triad. The difference between the two is that the medical profession uses chemicals to control body function, in effect over-riding the body’s own autonomic nervous system. Thus, the allopath attempts to control the other two sides of the triangle with substances such as tranquilizers and antidepressants for the mental aspect, and muscle relaxants, analgesics, and anti-inflammatory drugs for structural disturbances. The use of nutrition is directed toward building tissue by providing the basic raw materials for normal body function. After all, our cells are made up of what we eat and drink…not what drugs we take!

Mental health care has been dominated by Psychiatrists, Psychologists, and various types of counselors. Mental health issues often respond with less counseling and fewer drugs when the care is directed towards the other two sides of the triangle. Insight into the patient’s emotional status may be obtained by evaluating the nervous system using Applied Kinesiology manual muscle testing. Mental health problems can sometimes be improved by nutritional and structural corrections, determined by manual muscle testing.

Are your health problems due to structural, chemical, or mental imbalances? With most people, their problems are caused by a combination of at least two or more triggers. For example, are your headaches due to your poor diet, your automobile accident that happened six years ago, or the emotional stress you feel at home? Or are they caused by a combination of all three stressors?

The key is to determine which factor is primary!

As an Applied Kinesiologist, structural balance is readily and easily evaluated via manual muscle testing, which will allow me to help determine the basic underlying cause of health problems. Call The Nutritional Healing Center of Ann Arbor at (734) 302-7575 and ask to be seen by me, Dr. Joel Vickers, and I will do my part in restoring and balancing the physical side of your body through the factors of good health!