Type II diabetes, often called non-insulin-dependent diabetes, is the most common form of diabetes, affecting 90% – 95% of the 30 million people with diabetes.

Unlike people with type I diabetes, people with type II diabetes produce insulin; however, either their pancreas does not produce enough insulin or the body cannot use the insulin adequately. This is called insulin resistance. There are numerous possible causes for this type of Diabetes but the most certain are lifestyle habits (including poor eating habits) and lack of physical activity leading to obesity or overweight.

The first line of medication therapy for Diabetes is Glucophage (metformin). It is thought that it works by making the tissues of the body more sensitive to insulin in patients who have become resistant. The truth of the matter is if you look up the mechanism of action of metformin in the official package labeling you get a list of wonderful things metformin does without any explanation of how. Not very scientific.

Metformin is a physician’s favorite to use in diabetic or prediabetic patients that are overweight because it induces weight loss. It also induces diarrhea, stomach cramps, nausea, and other abdominal discomforts. No wonder people lose weight while taking it!

Metformin also is known to cause nutritional deficiencies. It reduces the body’s ability to absorb vitamin B12.  It also causes folate deficiency and an increase in the amino acid – homocysteine. These deficiencies can lead to an increased risk of heart disease, nerve damage, and much more.

It can cause a dangerous condition known as lactic acidosis.

The pH of the body becomes too acidic and this condition can cause coma as well as be fatal. The warning that accompanies the drug says it is a rare condition; however, it also states that it is fatal in 50% of cases in which it occurs.

The truth is, in practice, as a Doctor of Pharmacy, I have not seen results with Metformin. More often than not, patients feel ill and get no results yet are kept on the drug because it looks good on paper. Meanwhile, these patients feel horrible, their conditions are worsening and they are increasing their risk of serious illness and nutritional deficiencies. 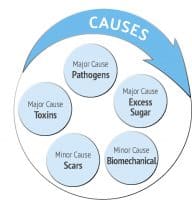 It is well known that diabetes is a lifestyle/dietary disease. Before we had McDonald’s on every corner and Hungry Man TV dinners as the staples of our diets, these problems did not occur on a large scale. Dietary and lifestyle changes are the safest and effective treatments for Diabetes because they address the cause. AND now, at The NHCAA we address the symptoms and the mechanism! See more.

Taking whole food supplements and eating proper food for diabetes is hands down the most effective way to treat diabetes. It can be done and we specialize in helping people regain optimum organ function and real health so they don’t need drugs. Drugs don’t cure, but Mother Nature does. Contact us for more information on diabetes diets and how to choose supplements.​

Yours In Health,
Amanda Childress, PharmD

Take the LACTIC ACIDOSIS QUIZ to see if you have lactic acidosis.